The hardest building of the game[edit | edit source]

This building appears often (every level) and a lot of missions require entrance (destroy a generator, kill the owner, free a prisoner)

This is the easiest way to die, and the biggest mistake to make is to enter without checking the situation. Looking at the room from outside is the safest way to increase your chance of success, especially to avoid the trap. 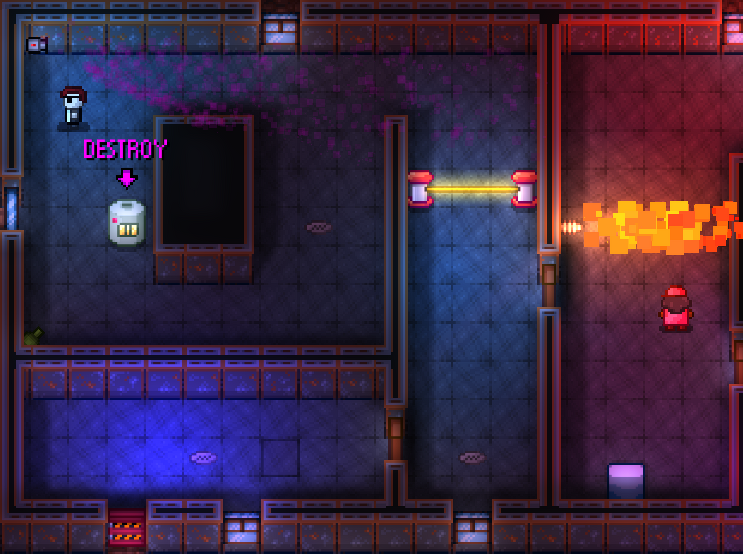 Fire-spewer creates a wall of fire for 2 seconds and has a cool down of 2 seconds. If you walk on fire, you will receive a huge amount of damage and get trapped in (0 to 52 damage based on how long you stay in fire).

You might say "it is not dangerous, you just have to wait to pass." But it could be deadly if you don't pay enough attention to it. Remember where it is because during the fight you may not see it and get killed.

Use it at your advantage : It is possible to get NPCs to walk through it as it triggers. However, if it is actively spewing fire most NPCs will wait for it to stop before advancing.

They are a deadly combo :

The camera will turn around, and alert everyone when seeing you. Turret will fire and damage you with an insane rate of fire (every bullet deals 5 damage). Fighting aside a camera is not very ideal if you don't want to die. However, cameras only have a limited field of view (shown with purple particle effects) and have a blind spot directly next to them.

Use it at your advantage : If you hack a camera with Hacker or Scientist, you can get it to recognize owners instead of non-owners, causing your enemies to get a very large surprise when walking through it.

They are the most problematic obstacle. A yellow laser will alert owners, a red laser will cause a Laser Emitter explosion. Thrown items such as (Rock or Shuriken) will trigger the laser, but a bullet will not. If you absolutely need to cross a red laser, throw a rock from a distance to avoid explosion

It is very dangerous without any awareness. This is why you should look at the buildings from outside before entering. It could deal about 30 damage or paralyze you during a fight for 30 sec (in this case, you can do nothing to avoid death). While advancing through a hideout, make sure to keep an eye open for floor tiles that look different from the rest.

They patrol around the complex and fire on sight. They are a little bit hard to kill but the biggest danger is to fight them near traps or turret. Indeed, you can easily get stuck between security and Goon and die in a few seconds.

However, you can easly by-pass them if you stay behind them, they are always patrolling in a room. Killing them is not always the right solution.

They are less powerfull than the Goon but much more dangerous because they don't stay in a delimited area but travel the complex. They are more likely able to spot you. But you can predict their movement: they always move from an object to another (eg. Computer → Camera → Safe → Generator → Computer → Camera etc...)

- The camera has a blind post near its base. Use this safe place to avoid Security cam. Or learn the trait Camera Shy to be invisible to camera. 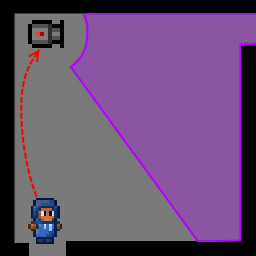 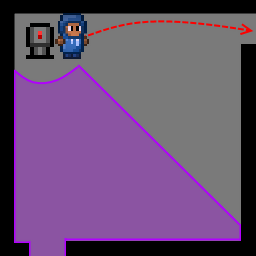 Step 2 : Wait until the camera is not looking at the second room and pass

Remember to close the door behind you, because camera can see you even if you are on the second room.

-To avoid owners, try to predict where they are going. Depending on their trajectory, there is usually a corner or other room where you can hide yourself. This isn't very intuitive but after a few tries, you will see it is very easy to stay hidden. 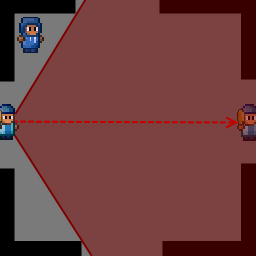 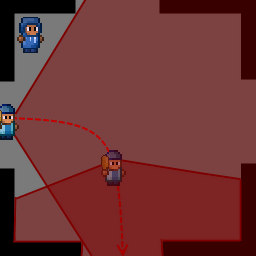 When the owner is going to turn, stay on the opposite corner

Reward : all the stuff which owners had

It is dangerous but works as well.