"Welcome to the City Park! a.k.a. Cannibal Country. Warning: Outsiders will be horribly mutilated."

The Park is the official third Stage in Streets Of Rogue. It starts on floor 7 and continues until floor 9. It is preceded by Industrial and contains many buildings, objects and characters not found elsewhere in the game. In level 8, the second level of Park, all the ponds are frozen, and you can slide on them.

The Park is home to many hostile Cannibals, who will attack the player on sight, as well as dangerous hidden Bear Traps and Mines. It is the only district in the game that is not patrolled by Cops.

Ponds are a type of naturally occurring generation in the ground. They come in 4 different variants and only spawn in the Park area. They can be swam in with decreased movement speed. 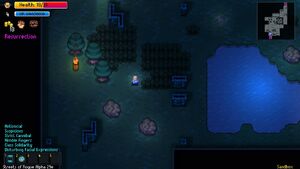